I have been wanting to write you something but I SO TIRED I CANNOT THINK.

It’s 9pm and it is lights out for me. I need to promise myself to not run myself so dang ragged. And I promise you, dear blog, tomorrow, tomorrow. I love ya, tomorrow. You’re always a day after nowwwwwww. zzzzzzzz

When I was a kid I remember staying up late to watch old episodes of The Twilight Zone and freaking my freak out while not really knowing what was getting my heebies jeebied. The premises of a lot of the shows were simple, sort of creepy, but nothing too scary when you really thought about them in the light of day. But I was watching them by myself, late at night, listening to the wind outside, and then before I knew it HIYABBA there is a DEMON on the WING of the PLANE and I SHALL NEVER SLEEP AGAIN.

This is the same sort of feeling I got reading Annihilation, the first Southern Reach Trilogy book, by Jeff VanderMeer. Sitting here now, I can tell you what happens, and it seems kind of creepy, but not nearly as creepy as when I was reading it last night; it seemed sinister to the point of neck hairs standing up. The story is about four women who have been sent into “Area X” by the government. Area X is an environmentally wacked out piece of deserted land, for reasons that are not made clear from the beginning. The four women, a biologist, an anthropologist, a psychologist, and a surveyor, are to go in and figure out what is up. There have been previous expeditions that were sent in and failed due to people dying, or turning on each other for unknown reasons and killing each other up, and the like. In other words, what happens in Area X stayed in Area X, much like Vegas.

Let’s celebrate the spooky with a song from everyone’s favorite Darlene-Connor-esque songstress.

I fell down this week. Slipped on a metal grate, and BOOM I was lying down on the ground with the rain on my face and a bruise on my buttbone. Laid out. It hurt, but more than that, it felt so weird to be lying down on the sidewalk. I was fine though. I think there is a metaphor in there somewhere, but I can’t think of it because my rumpus be paining.

That’s all I can muster up. I hope your weekend is lovely, with no trip ups, slip ups, or falls.

I’ll Tumble For You, Culture Club

I’m feeling crushed today, obsessively looking at my Twitter feed in bed last night, looking at it first thing after my alarm went off this morning. This world, you guys. This world.

Dragging my ass up and getting to work. Let’s listen to this before we go. On and on, on and on.

On and On, Erykah Badu

After a long stretch of time where every flight I was on insisted on playing Labor Day as the in-flight movie to the point where I thought that there was some sort of airline policy about it or that Josh Brolin had taken over the FAA just so he could force us all to stare at his Spock beard, my flight back from Chicago had a different option. This time around it was Begin Again, starring Keira Knightley and Mark Ruffalo. I thought it was charming, although BE WARNED Adam Levine and Cee-Lo Green are in it too. What makes that ok is that Cee-Lo is only in it for like five minutes and Adam Levine is playing Adam Levine, which somehow makes it better.

Keira Knightley is Gretta, a songwriter along for the ride when her rocker boyfriend (Levine) gets a major record deal. Ruffalo is Dan, a burned out record executive who hasn’t been inspired in a very long time. Their paths cross and they strike up a friendship. Ruffalo is charming, as per usual, with his floppy hair and sad eyed smiles, and although he is playing it super schlumpy, he continues to be that movie star that you want to hold hands with as you walk around the city. Keira Knightley sings many of the songs in the movie in a sweet and simple way that fits the sweet and simple nature of the story, and the entire thing was soothing, which was perfect for me to stop feeling like an antsy sardine in my middle seat on the plane. Scenes are shot throughout New York City so you know I’m a sucker for that, and the relationship between Ruffalo and Knightley was endearing. This isn’t a soul shaker, but if you’re wanting something warm and pleasant, watch this one.

Getting back from a trip, no matter how short, always feels a bit punishing on the other side. My life (yours too?) is apparently set up in such a machine-like way as to result in all kinds of back ups, clogs, and pile ups whenever I look away for a minute and interrupt the sausage-making that is life. (Can I just tell you how much I do not like the sausage making metaphor? Ugh, why did I use it? Let’s hold hands and resolve to never utter sausage related symbolism ever again, unless it is peen-related, in which case I’ll allow it). This means that digging out has to happen, which harshes my vacation buzz I had going, man, like for serious.

Let’s take four minutes and pretend like the only thing on our to-do list is to execute some sweet choreography in front of 2-D animation. If only.

Yesterday and today have been dumb days. Not bad days. Just a lot of dumb stuff going on in large quantities. Spilling shit all over myself. Forgetting things. Losing things. Making mistakes at work. A storm of stupid is rolling through these parts and I do not seem to have a shelter handy, so I am just putting my face up and rolling all around in it. Picture that scene in Shawshank Redemption where Andy Dufresne stands out in the rain with his arms raised up, getting soaked. Only instead of Andy, it’s me. And instead of rain, it’s dum-dum stuff. 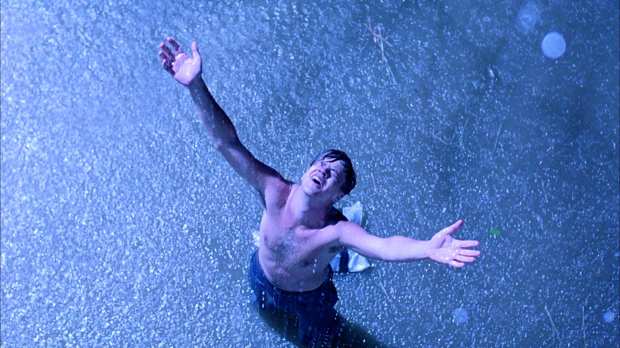 During my lunch break today, I called Fixy and went down my long list of work-related blunders: we may as well call it the Lamentation of the Ding-Dong. And you know what he said to me when I was done? He told me that not one thing I had said was a thing that anybody cares about. Except he managed to say it kinder than that, somehow. And it made me feel so. much. better. Perhaps a message of “nothing you did today matters a whit when you really think about it” may SOUND awful, but really, it’s quite lovely. It’s not that my work isn’t important- I believe it is. But taken as a whole, or at least in big pieces, is what makes it so. Not the odd task here or there that gets screwed up.

Maybe “Nobody cares” isn’t exactly a Coach Taylor locker room talk, but it worked for me.

Let’s have a song.

Ain’t Nothing You Can Do, by Bobby Bland

A hodge podge clean up sort of day to round out the week!

First of all, Dancing with the Stars is back! This is like the return of football season for some of us. You guys, Carlton is on it! I really shouldn’t need to even sell it beyond saying that.

Second of all, I discovered a delightful picture book for kids that just came out called This Day in June, by Gayle E. Pitman. It’s a cheerful celebration of a book that talks about Pride parades, and it’s so well done. Sweet illustrations, inclusive language.

Third of all, I read this monster tome of a book called Far from the Tree: Parents, Children, and the Search for Identity, by Andrew Solomon. In it, Solomon discusses the experiences of parents who have children with significantly different identity markers than themselves. He defines this broadly– he talks about families with children who are deaf, who are prodigies, who are little people, who have Down syndrome, who are transgender, and much more. There are lots and lots of personal stories of individual families that Solomon talked to while researching the book– in fact I would say those stories are most of the book. These stories paint a picture of diversity but also of such love that unites these families. There were many passages that made me think, and some that I wrestled with. It’s a daunting read (nine HUNDRED pages), but it reads quickly.

Fourth of all, IT IS FRIDAY, FOOLSSSSSSS

This song makes me think about the ways that the things, the people, the feelings, the self- the things that can seem so fixed across time, so solid, can be so ephemeral. It’s so beautiful, so terrible. What do you think of as unchangeable?