This morning, I was running super late. I grabbed my stuff, got my coat, and hurried out the door. As I walked down my front stairs to the sidewalk, there, on the bottom of the stoop, on sidewalk level, was a pair of Nike sneakers. I could tell that they had been worn, but they were still pretty nice. The style was a little bit Grandpa-ish. They were perfectly placed, side by side, at the bottom of my outside stairs. Facing my house. I was in such a rush I just walked by them, looking over my shoulder as I walked away, thinking “is someone coming back for those?” It felt like a scene in an arty movie. Like there was some sort of meaning there that was just beyond my understanding.

When I am confused, sometimes I say “What the aitch?” When things are super duper confusing, Nordic Boy will up the ante and say “What the Preparation aitch?” This was definitely a What the Preparation Aitch sort of moment. Any ideas on what that was all about, people?
Also, at lunch today, I was in a deli, and there was this businessman in there who looked like he was dripping money. His coat was thick cashmere and his shoes looked expensive and on point. He even had a sort of silky ascot on. Thurston Howell the Third, he was. I was behind him waiting to throw out my garbage after eating, and he stood in front of the garbage receptacles- one for recycling, one for composting, and one for landfill. All were clearly labeled and had photos of what things go in which. He stood there, looking at the receptacles, and then angrily dumped all of his stuff into the landfill bin, not separating anything out. He looked at me dead in my eyes and huffed “I guess I’m supposed to go HUG A TREE or something.” And he stormed out.
What the Preparation aitch, people.

Some days are head desk days. 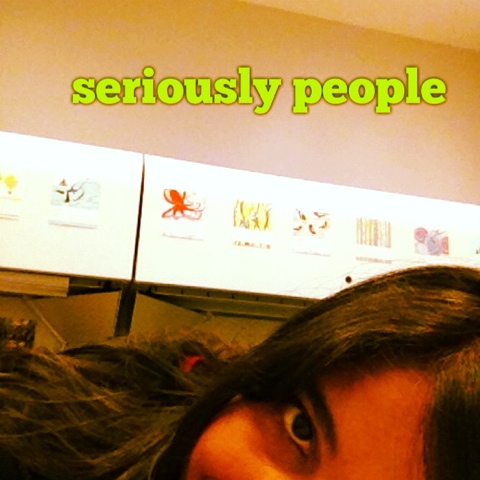 I keep forgetting my lunch at home. This morning, someone put a piece of homemade tomato mushroom focaccia (wrapped up, put partially inside my purse, wearing my sunglasses, with my work badge attached) by the door. Hint received. 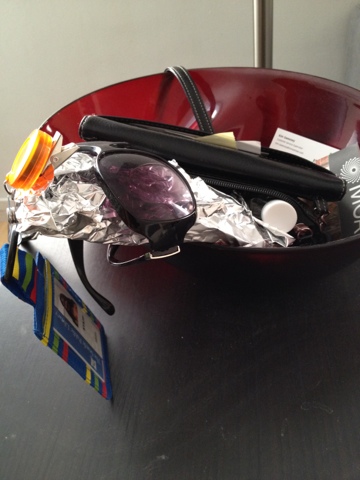 Apparently when the sun comes out in Seattle for more than a couple of days, I start to come to work dressed like a meringue. 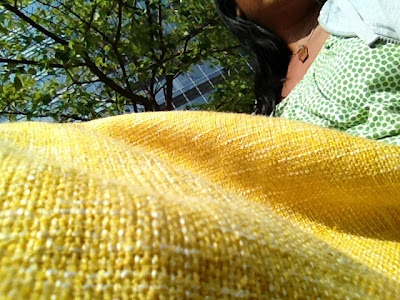 My lunch view = cure for the grumps. 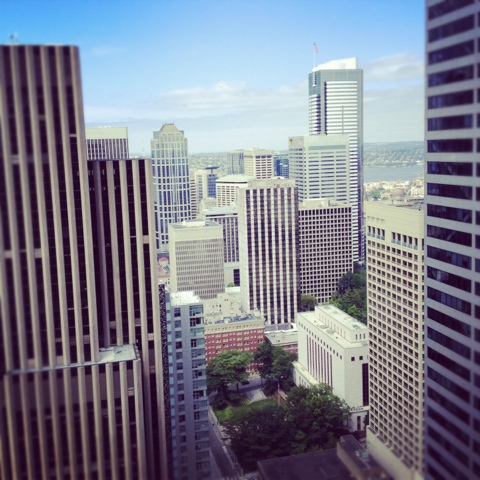 Terraces are the best. 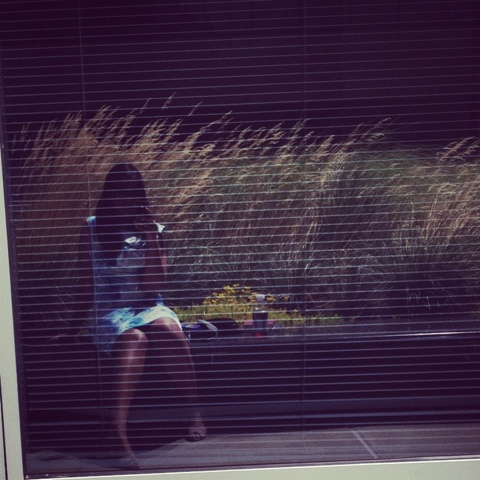 Today during my lunch hour, I was standing in line at the drug store, and this man in line was singing softly along to the piped in music. It was “Juke Box Hero” by Foreigner, in case you were wondering. The woman behind him thought he was talking to her, and so she said “excuse me?” to him. Instead of saying “nothing,” which seems like the expected response, he said all loud and proud “I am SINGING. I love to SING.”

Then, I was walking down the street, and there was a lady on the corner who was trying to stop people to sign some sort of petition or something. You know how that goes- people hurry by, trying not to make eye contact, and the most petition lady can hope for is for the more polite people to mumble “sorry, not today,” or something like that. I heard her say “do you have a minute to talk to me today?” and a woman responded “Yes, I do have a minute, but I just don’t feel like talking to someone I don’t know about something political.”

So you guys, obviously this is Blunt Honesty Day and no one told me.

I am trying to think of something Bluntly Honest to tell you. I feel like honesty is easy, it’s coming up with something sufficiently blunt that is harder.

Here are some honest facts.

Someone flipped me the bird when I was walking down the street the other day. It made me think about the fact that I don’t often see bird flippage outside of a vehicle, just out on the street like that. I actually don’t know what the bird was for- I was walking around minding my own beeswax and I don’t think I was doing anything annoying. But some dude looked me dead in my face and boom. Bird. It was funny and also did not make me feel good, somehow at the same time. Kind of like watching Toddlers and Tiaras makes one feel.

In the past couple of weeks I have had people I admire on Twitter tweet something at me or Favorite something of mine. I feel all kinds of stupid that: (a) I admire people on Twitter, and (b) that I would get that excited about getting Twitter-acknowledged. That can’t be healthy, right?

Anna Breslaw on Jezebel described Louis CK as the “Lethargic Husky Dream Man of men and women across the nation” and that made me want to die from the funny.

I realized this week that I became the “Loudly Sighing Lady” at work and made a note to STOP IMMEDIATELY.

I don’t know if that was blunt, but it’s all I got. I hope you have a lovely weekend!

By this point in my week, my thoughts are no longer cohesive. So, you get Weird Lady Brain Potpourri today! Aren’t you so excited?

I saw the security at a drug store totally nab a shoplifter today! They chased this guy out onto the street (there were TWO officers! Like Chips! Only nothing like Chips!), and tackled his ass, and then cuffed him, and then pulled up his shirt and bam! There was a shiny new Bic pen pack tucked in the guy’s waistband. Bad boys, bad boys, what you gonna do when they come for you? And your Bic pen pack?

I have had a week full of bad hair days and I am not above telling you that this seriously bums me out.

I bought new glasses, and although I loved them in the store, I now have a fear that I went straight into Velma from Scooby Doo land. Jinkies!

I bought plane tickets for an end-of-summer vacation, using mileage that made the entire thing free. Is there any better feeling than that? I do not know of one.

Biogirl made up a totally disgusting sexual term called “dental spelunking.” I love that girl.

Speaking of disgusting, my office chair at work has started doing this thing where every time I swivel, it makes a farty noise. Class out the ass, people.

Last weekend Biogirl and I went to Bellingham for the afternoon. It was the prettiness. 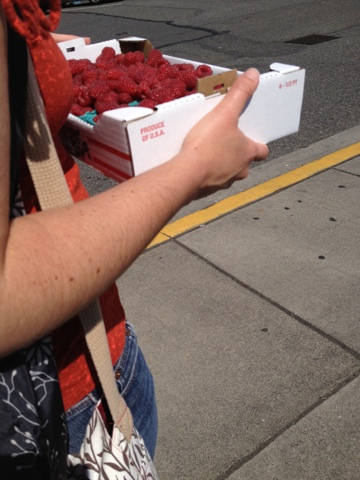 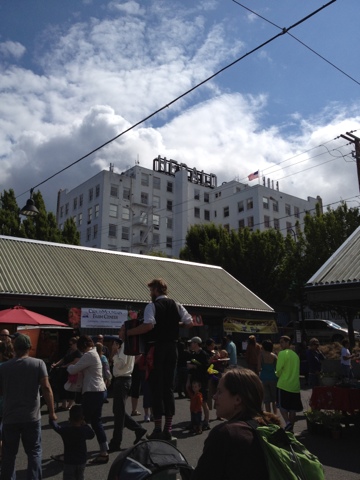 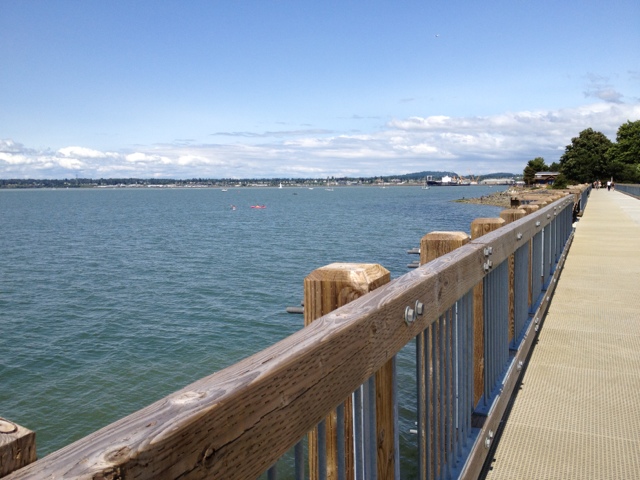 Hey, here’s a bad idea. White dress, sushi for lunch, soy sauce. Yet I’m about to do this. 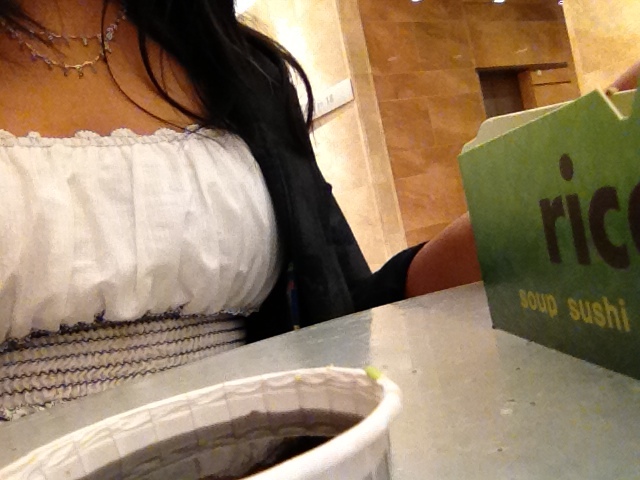 Did you think, from the title of this post, that I was going to talk about Mayim Bialik as Blossom and her shenanigans with Six and Joey and the gang? Alas, it is not to be today. Sorry to disappoint as that would probably be more entertaining.


The other day a photographer was at my work doing some professional photography biznazz, and as he was setting up me and two of my co-workers posed it up for fun and did a damn good recreation of the original Charlie’s Angels logo. You know the one.

I was the middle angel. I’m thinking that was supposed to be Kate Jackson, who was the smart one, who I feel like should have been my favorite, but my actual favorite was always Jaclyn Smith, just because I thought she had the darkest skin. Listen, little brown girls have to make do with whatever cultural representation we can get sometimes, including reassigning ethnicity to white people when needed. Necessity, mother of invention, you know what I’m talking about.


(I also want to point out that contrary to what this blog may tell you, I actually do a lot of working while at work. Like, a lot a lot. I know I tend to tell you about the posing for silly pictures and cheerleading in my office and singing Friday songs with my coworkers, but there is mostly actual work happening, like 99% of the time. Just to be clear).


Anyway, the photographer emailed us the photo later, and you know what?  I could not have been more pleased with myself in that snapshot, you guys. It was like I had waited my whole life to be the center of the Angels trio. I simultaneously love that and am heartily appalled as well.


Let’s see, what has been going on this week in non-Charlie’s-Angel-posing news? I went to see the Hunger Games (more on that in Consumables) at the Seattle Cinerama where they make chocolate popcorn which causes the whole theater to smell like fresh baked brownies, which is a reason enough to go to the movies if you ask me. I also went to a waffle brunch at a friend’s house where the ladies engaged in a great debate on whether or not The Rock is hot or not. There didn’t seem to be much room for gray area here- it was a divide akin to the Grand Canyon, we found. Also discovered? Peanut butter waffles are delicious. Some things are unanimous.


We also had one warm, sunny delightful day in the past week. Everyone in Seattle immediately ran outside to find something to do just to be in it. What I decided to do was head over to the University of Washington campus to see all of the cherry blossoms in bloom. I just went, and strolled, and sat, and it was perfection. Seattle people, go do that before the bloom is over!


I have high hopes for this weekend, despite not so great weather reports. “In my opinionation, the sun is gonna surely shine.” Aw snap! I brought it right back around to Mayim Bialik, dudes! Full circle post, wut wut!