A couple of days ago, I got to ride a ferry for my work day because I got to go present my knowledges to another library system (what? I KNOW THINGS) and wow was it a gorgeous, splendiferous day to ride around on a boat. I love you, Seattle! 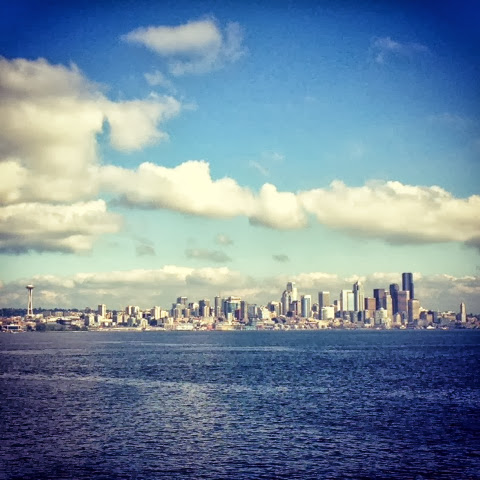 And then, the day after, and each day since then, someone turned the lights out in Seattle. And turned on a wind machine. And a sideways rain faucet too. It happened overnight. I am less enamoured with you, Seattle!

Thankfully, we have our teevee set to keep us warm. New fall shows! Returning fall shows! It’s all very exciting for a girl such as myself. Here are some early teevee thoughts, most of which are too early to really draw any conclusions because most tv shows, by their format, need time to grow a little, so judging now seems a little unfair. But don’t worry, that shall not stop me.

Teevee
New Girl
This show always pains me a little bit because the jokes! Mostly great! (Winston saying “I know everyone’s going through a lot, but I think it’s time for me to start a puzzle” is sort of the highlight of my week) but they throw in those hipster-racist jokes every once in a while that make me NUTS. I was afraid that after that horrendous Indian wedding episode that I was never going to be able to look at this show ever again, but my love for Nick and Winston has carried me forward. Schmidt is sort of dead to me, since they mostly make him do that icky stuff, and it was bad enough that they had Cece falling for him despite his inability to stop rapid fire racist stuff at her, but now he’s got another lady who’s totally into him? Ugh. Stop that story line, New Girl. It’s gross.

Sister Wives
I know I just talked about this but I was super wrong about it. I said that reality shows, including this one, are about nothing. And then I watched Season 2 where Sister Wives had episodes about having to flee the state because of the legality of their family structure, and an episode about how their kids socialize with kids outside their faith, and an episode about sexual expectations for the teens in the family. It was actually more than a giant polygamist family going to the grocery store every episode. They’re exploring bigger things. Sorry, Sister Wives.

The Mindy Project
Every single time I see James Franco in something, I think: oh. He’s actually really good at this! I always forget that. I guess it’s because of the persona that people always talk about, but I have total actor amnesia with him every time. It’s like when I hear a Kanye West song and I think: oh yeah. He can make music, aside from being a jackass. NOW I remember. I thought Franco was really funny in The Mindy Project, and I hope he keeps showing up.

The Michael J. Fox Show
I really hope this stays good. I thought the pilot was good, and who doesn’t love Alex P. Keaton? We need him in our lives, yes? Plus Marie from Breaking Bad! And Bunk from The Wire! Being very un-Marie-like and un-Bunk-like, thank goodness, because that would be weird.

Sleepy Hollow
Considering the decidedly spooky weather we have been having, I was super ready to be into this. I am going to stick with it a while longer, but so far…the EXPOSITION IS KILLING ME. So much explaining! If you can’t tell your story through the action, and the story is complicated, it is excruciating. “I have found a clue in the note that was left here, and the note says that there were demons who fought with witches, but when the witches fought back, there was an energy force that was created whereby the demons need to be using a steel blade in order to kill others, but they can’t be killed with a steel blade, they can only be killed with a medallion, which was created by a holy order, and the holy order has hidden the medallion…” Oh my gahhhhh. That’s not anywhere near the actual storyline, but there are paragraphs of dialogue like that. SHUT UP AND GET CHASED BY HEADLESS MAN, PLEASE.

Blacklist
We all knew that Stephan from Pretty In Pink would grow up to be a terrorist, right? I’ve only seen one of these, and it’s pretty silly, but James Spader gets to be creepy and weird, which all we have ever wanted from him, and so now we have it. You have to just ignore some plot silliness, is the only thing.

Marvel’s Agents of S.H.I.E.L.D.
Why can’t I remember the name of this show? I keep talking about it to people and I am always “Marvel Shield Agents. Marvel Shields and Agents. Agents with Shields? Sonny and Shields? Brook Shields?”

Parks and Rec
The first one this season was funny, and heartwarming, and delightful. It seems like that would get old or repetitious or something, but not to me it don’t.

And yes, of course, Breaking Bad is coming to an end tonight. THANK GOD. My ticker cannot take much more of this. AMC was running a marathon of all the seasons in a row leading up to the finale and all I could think when I heard that was WHY anyone would do that to themselves all in a row like that. I remember, before I started watching it, a friend told me I had to watch it, and she said “I can’t exactly say I enjoy it, because it’s not a pleasurable show, but it’s SO FUCKING GOOD.” For all the commentary I have heard about it since, that still pretty much sums it up.

Happy teevee time, pals! Here’s a song to start your week that’s been speaking to me lately.