I’m typing this on my phone, is the first thing that I want to say up front so as you understand the pain-in-the-arse-ness I am feeling and also so that you excuse any auto-correct boolshizz that may happen along the way here.

I wrapped up my Madison trip, whipped through Chicago for less than 12 hours (most of which was spent in sleepy bye bye land) and then got in Alli’s car and drove up to Traverse City at the top of the Michigan Mitten. (I wonder if people there say good morning by saying “top o’ the mitten to ya!” because if they don’t that’s a damn shame). We checked in to what we have now dubbed Chateau Relaxeau, also known as Alli’s sister Steph’s house, for three days of silly girl times. During this time, we ate 4 kinds of cheesecake that was sent all the way from New York City (“New York City??? Get a rope!”), we confessed things to each other that made all of us cry (feelings! Whoa whoa whoa feelings! That’s right I am Morris Albert-ing you), laughed until we wanted to pee ourselves, and saw some ridiculous beautiful scenery every last place we looked.

Oh, and I finally found a cocktail that I really and truly liked! And you know what it took? It took a soothsayer like Steph to look into my soul and understand the truth of the matter which is that I am, at heart, the least refined drinker you’ll ever meet. So, with flattered thanks to all of you over the years who have looked at me and said “try a gin and tonic” or an Old Fashioned or a Lemon Drop or a Tom Collins or a Apple Martini or a Whiskey Sour or a Manhattan or a whatever, you have clearly misread the true essence of who I am and Steph knew better within 10 seconds. She looked me dead in my face, pointed at me and said two words: Detroit Cooler.

Vernor’s ginger ale (it’s got to be Vernor’s), a shot of vanilla vodka, and a shot of root beer vodka. That’s right I said ROOT BEER VODKA, bitchez! Class out the mutha effing ass.

I have to admit that most of my even wanting a favorite drink in the first place was so that I could sound cool ordering it. I mean, Joan Holloway ain’t ordering no goddamn Detroit Cooler. So on the one hand I’m disappointed. On the other hand, for the first time in my life I could see myself getting seriously shit-faced. So…yay?

In other breakthroughs, I finally have some semblance of a Free Pass List. See how my lady pals keep things so elegant? You know those lists where you pick 5 celebrities that you’re allowed to sleep with if given the (obviously highly likely) opportunity? Alli has always had a list, for at least the past 15 years. Not only that, but her #1 spot has been held by John Cusack for all 15-plus years of it, unabated. She has even lobbied for him to be able to get two slots on her list, as if that makes any kind of sense. That’s serious passion, people. John, you better watch yourself because if given the opportunity that girl is going to tear. you. up.

I have never had a list. One, because I am very indecisive about such things. I don’t have a favorite color or a favorite food so how am I supposed to pick a favorite imaginary booty man? The other reason is that I am a bit predisposed to think that celebrities are fuckwits, and I don’t want to fuck a fuckwit. Also, in my theatre and dance days I was peripherally around a good number of that lot and 90% of them were straight up dicks. So, I don’t know about this whole list business. Still, on the 6 hour drive from Chicago to the Mitten Top, Alli counseled me through list-making. And after six hours- (SIX HOURS! Let us all take a moment to applaud Alli for her friendship duties in putting up with that car ride) I came up with three candidates. They are still candidates, mind you. My list is firmly incomplete, in metaphorical pencil, and nowhere near being in a state where I would laminate it. My candidates are: Jon Hamm, Daniel Craig, and Ewan McGregor. Even as I say this, I feel that I should be more excited about my list. I don’t know. I’m sure I’ll have an epiphany at some point. It’s like the drink: I was rooting around for years when who knew that all I needed was for the Detroit Cooler to walk into my life. I need the Detroit Cooler of men, perhaps. Except, ew! That scares me, just as a, like, concept.

Anyway, the Mitten Top was grand. I’m in the hometown homestead now, with a week full of hospital and doctor time to occupy myself, but no computer except for this here phone so we’ll see if further posting happens until I return to Seattle.

Until then, I leave you with a photo I took in a candy store the other day. Just cuz. 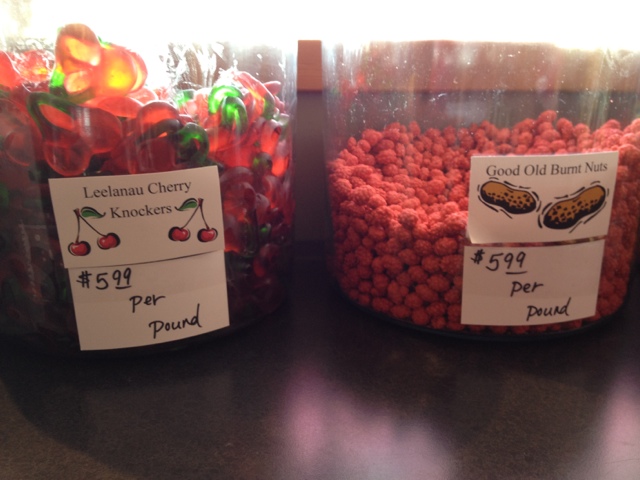