Ok, as promised, I am back from my “vacation” (if you want to call that shit that I just went through a vacation, which would be, like, the saddest thing ever), and I am sick of having Work Be My Whole Life, so I am stopping that right this minute and doing what I said I was going to do, which is Rejoin the World.

And, to celebrate, guess what? I have gas!

Bet you didn’t think I was going to say that, did you? I am talking about the fact that we had a gas line put in so that before next winter, we can get a new furnace. We were thinking about taking a trip to England this summer or fall, but then our heater started being a total asshole so now we have decided that a having heat is more important than travelling the globe.

Listen, I never said that Rejoining the World would be so’s I could do exciting stuff.

Actually, the gas line thing was sort of exciting. The people in the orange vests came and they had a crazy amount of equipment and they bored a hole from the sidewalk to our house and tore up the street and one of the dudes was smoking the entire time he was doing so which didn’t seem like the smartest idea in the world but what do I know. For all the work we do on our house, we never really have other people that we don’t know come in, tear shit up, do something, and then clean up and leave all within a few hours. Like, at least not people that we don’t already know. So it was exciting. We may have stood in our house and watched them through our window all day, like an inverted fishbowl. Maybe. 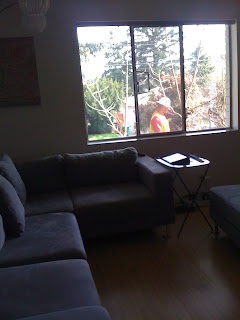 In the two days since we got back from our trip, I have successfully done other things that make me feel like a human being rather than a library robot. They are!

1. Made a haircutted appointment. I have neglected the head hairs for months, and I may soon be entering Cousin It territory, so to the salon I go. Tomorrow!

2. Made plans to go to not one, but two dance shows. That’s like, my church.

4. I emailed a few folks that I haven’t been in contact with for a while to inform them that I am indeed still alive, and hey, hi.

5. Signed up for the MS Walk in April. Nordic Boy’s sister has MS as does a friend of ours, so if we can’t get our asses out there for one morning to raise money/awareness, we really would need to be kicked in the derry-air. This year, my signing up was intolerably late due to my worky robotness. Stupid.

6. Made a list of people for whom I totally glossed over their birthday for the past three months and got them belated cards. Better late than never. I know, I am a freak about birthdays.

I would say that is a pretty good start to being human again.